The Philippines will be represented by 23-year old Alvin de Joya at Mr. World 2010 in Incheon, South Korea this coming March.
De Joya won the right to represent his country by winning the Mr. World Philippines last night. He is a registered nurse and a part-time model. He stands 6'2" and he is from Cauayan, Isabela.
It was an interesting victory for Alvin especially that he joined Mister International Philippines 2009 last October but only took home the People's Choice Award.
Second runner-up was candidate no. 3 Jason Villegas while 1st runner-up was candidate no. 2 Jericho Intacto.
The special awardees are Jason Acero (Best in Talent and Mr. Friendship), Mark Christian Daniel (Best in Formal Wear), Jason Villegas (Mr. Photogenic) and Robert John Porter who tied with Acero in Mr. Friendship award.
Mark Christian Daniel and Leonard Cosme were the other two in the Top 5. 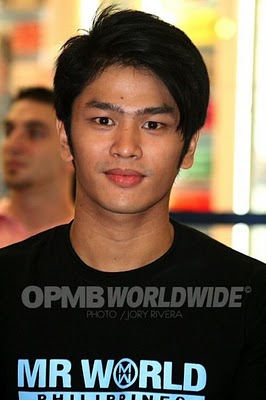